After months of planning, we finally held our 2017 Medieval Themed Family Weekend Gathering.  Whether you're planning a Knights Party, Halloween Party or a Renaissance Faire of your own, I hope you'll find these ideas and activities as much fun as we did! 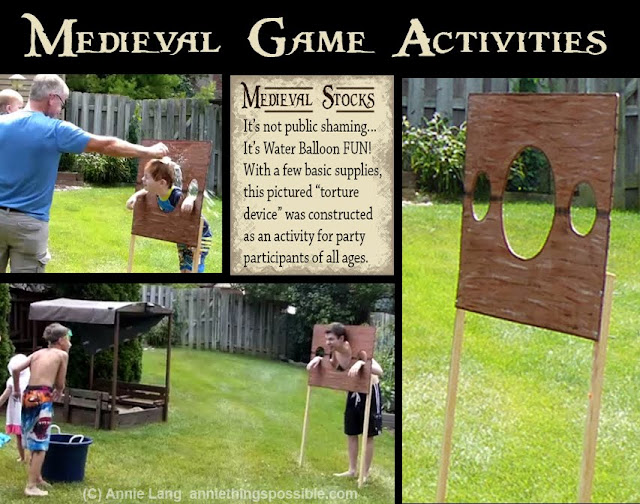 There were plenty of games for everyone!  One of our family members made this water balloon game from pvc board that she cut out and painted.  The guys mounted it on sturdy posts that were staked into the ground. The little folks needed a chair and "kids" of all ages had a blast with it!  Next year's theme will be Super Heroes so we'll adapt this as a beanbag toss game and mount Super Villian faces to it. 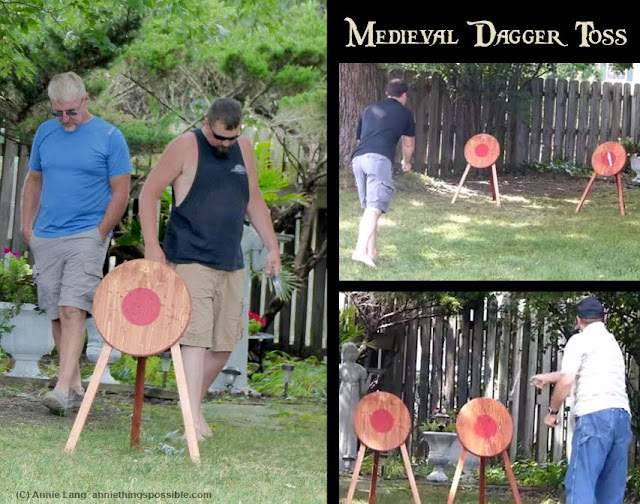 This activity was a BIG hit with the adult crowd and was actively used throughout the entire day.  A family member constructed 2 wooden targets by attaching round wood table tops (Home Depot for about $7 each) to hinged wooden legs.  Targets were then stained with a red target circle painted in the center.   The game was set back in a corner of the fenced in yard and out of the reach of children. 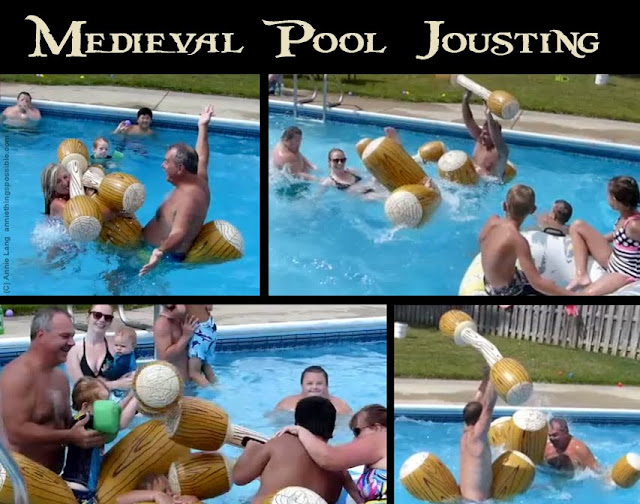 No Medieval themed party should be without a jousting event! We purchased a Swimline 9084 Log Flume Joust Set from Amazon and it was an overwhelming success! They are challenging to get on and stay on but for those who couldn't, the "boppers" were used alone to have fun with and logs were used to float on. They were a safe party activity choice because even the strongest jouster couldn't injure you with the inflatable "boppers".  Babies, toddlers, kids, adults and onlookers ALL enjoyed this fun poolside activity. 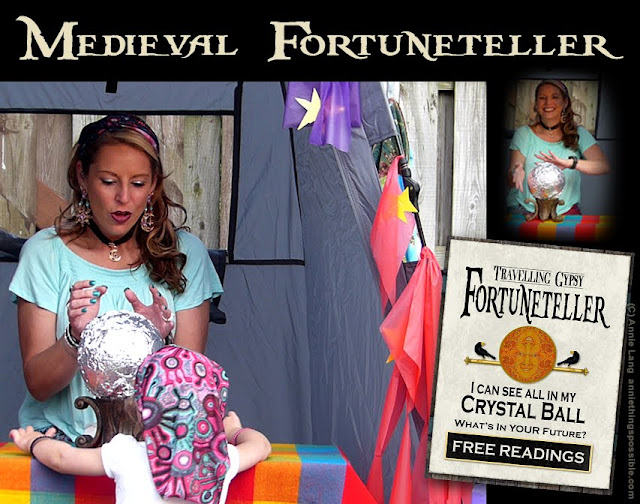 Gypsies are always welcome at any Medieval themed party and we were lucky enough to have a family member volunteer for this fun activity this year!  Best of all, she had a mini "Gypsy Girl in Training" to help her out.  The line was long at the Fortunetelling Tent with participants of all ages.  The tent we used was actually a Pop Up Pod Privacy Shelter Tent decorated with scraps of leftover plastic table coverings tied to the tent poles with cutout stars stapled to the makeshift ribbons.  The "crystal ball" is a ball wrapped in foil which sat on a candle pedestal base.  The Fortuneteller provided a prediction along with a choice of clever prizes for each participant.  Our party guests just LOVED it! 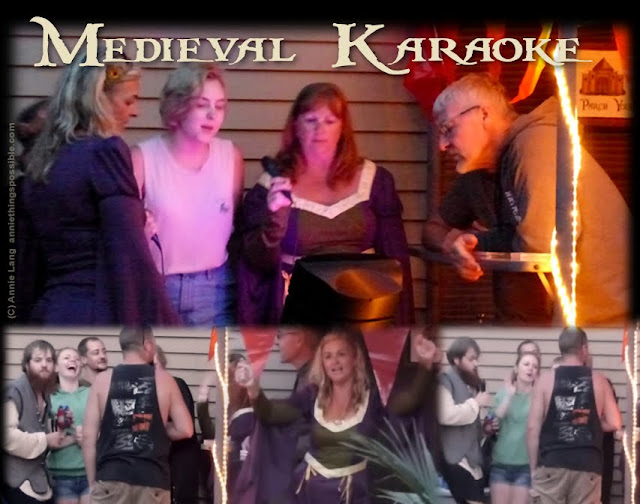 Every Medieval Party needs a musical song and dance show and that's exactly what we got when we brought out the Karaoke Station at sundown! 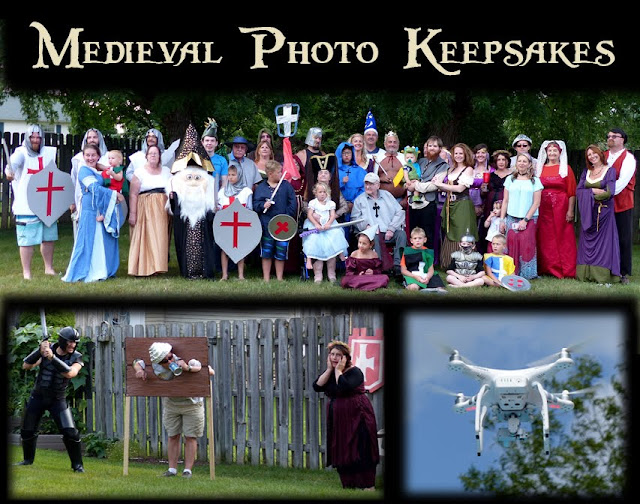 Event participant photo footage was taken from the air with a drone. Meanwhile, on the ground, a video camera captured each and every Medieval party guest as they walked by the camera single file while marching in the King's Parade. 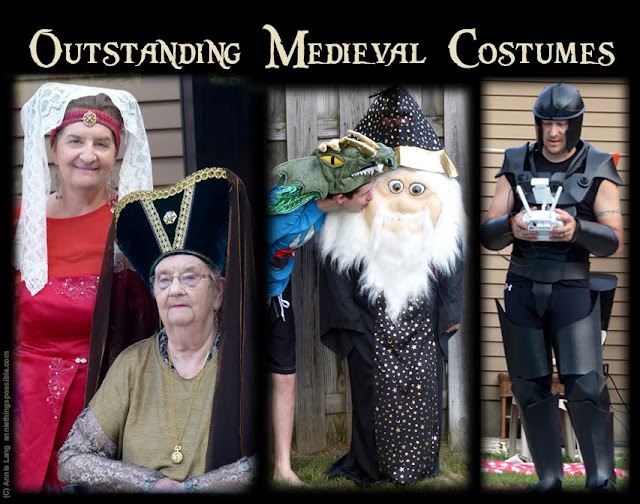 And now for the COSTUMES!  Most family members made their own or purchased them for pennies on the dollar after items went on sale after Halloween last year.  King's Parade family members lined up for group photos and individual shots before moving on to night swimming, snacks, chatting and singing activities.  The photo above shows just how "costume diverse" party guests can be.  The dark knight costume on the far right was created piece by piece by hand out of black foam rubber! 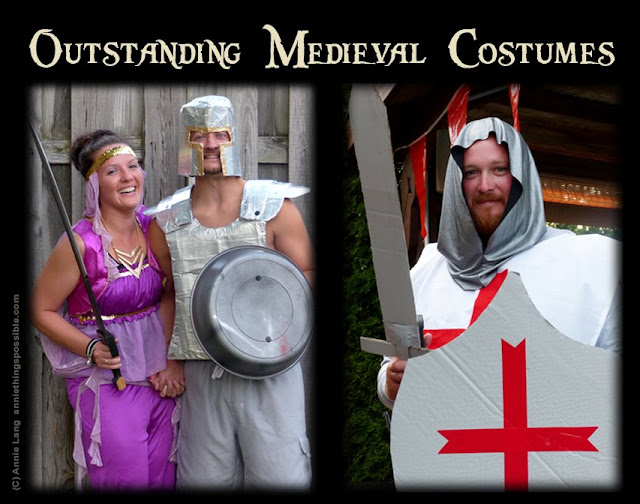 Both of these impressive Knights of the Kingdom are wearing handmade costumes...or maybe one was dreamed up by his "genie"! 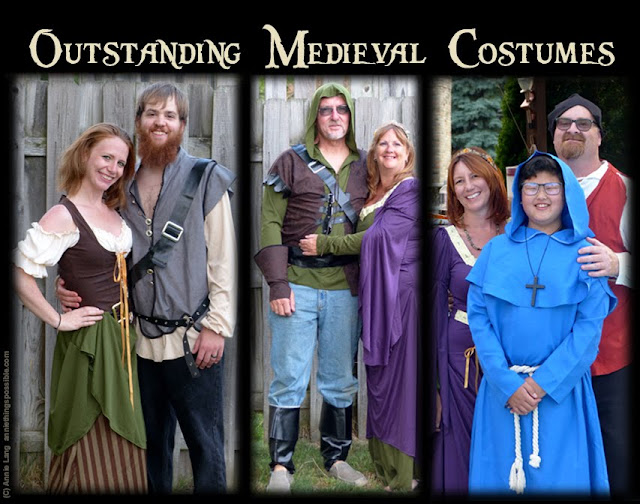 We also had more than a few family peasants and clergymen of the Kingdom who wholeheartedly joined in the Royal celebrations and had their fill of turkey drumsticks and wine as well!

THE KING'S BUFFET was served from the GREAT FEASTING HALL
As for the food table ...we smoked turkey drumsticks and chicken legs for the main course.  Served alongside fruits, vegetables, salads, bread and other healthy delights, no one walked away with an empty stomach! For beverages, we served The Jester's Berry Lemonade, The Knight's Iced Tea, The King's Rum Punch, The Queen's Sangria and the last but not least...Ye Olde Margaritas. Boxed cupcakes (served by the Queen herself), ice cream, popcorn, cookies and snacks were served after dinner...much to the delight of all the children running wildly about throughout the King's Castle.

All the Peoples of our Kingdom shall have happy memories for years to come! 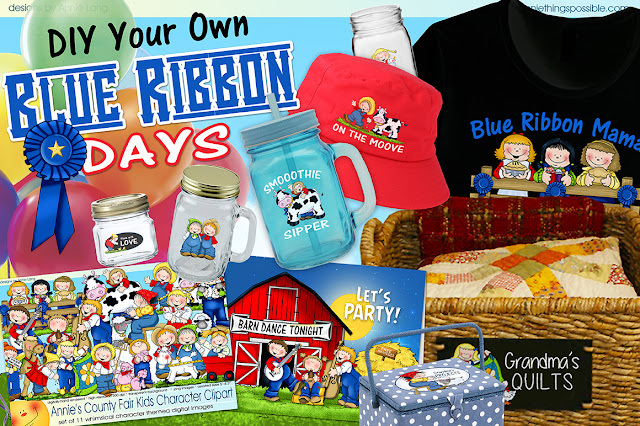 You can make every day a blue ribbon day with Annie Lang's County Fair Kids and County Fair farm themed clipart collections!  Make fun items for yourself, products for the craft booth or items for your online marketplace.  There's a license available for however you'd like to use them from Creative Market who now hosts my digital clipart, prints and fonts collections!

It's that time of year when bugs and happy little critters come out to play!  Annie Lang's playful bugs, whimsical bees, sweet ladybugs and other fun characters have been around for years and still remain as popular as they were when first released as line art patterns, fabric designs and digital clipart collections.  Here's where you'll still find them on newly released products and merchandise so you can make your own world of happy little bugs because Annie Things Possible with a little imagination!